DOHA: Ministry of Municipality and Environment represented by the General Cleanliness Department has readied Al Dhakhira beach for visitors after sand nourishment and cleanup.

Under a massive campaign, the Department cleaned the beach on around 1km-long stretch and removed 18 tonnes stones replacing them with a layer of soft sand along the beach. A total of 92 truck-loads – about 882 tonnes sands were taken there.

“Sand nourishment work of phase one started in April by removing stones followed by laying a layer of soft sand in second phase which was completed on May 9,” said Safar Al Shafi, Director of General Cleanliness Department.

Minister of Municipality and Environment, H E Mohamed bin Abdullah Al Rumaihi, is following up the projects for upgrading the services at beaches across the country, he added.

The Ministry of Municipality and Environment gives high importance on maintaining hygiene at beaches and islands because they are picnic spots attracting huge number of visitors — citizens, expatriates and families, Al Shafi added.

He stressed that such a programme for cleaning beaches was covering all areas of the country, adding that the programme was being implemented smoothly without any impact on daily routine work of the Department.

The Director of the General Cleanliness Department has urged visitors to cooperate with the Ministry in maintaining hygiene at beaches and islands by disposing garbage only on designated places and dustbins. 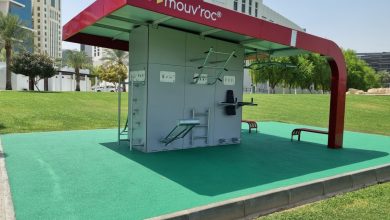