Doha: Adviser to the Deputy Prime Minister and Minister of Foreign Affairs and Official Spokesperson for Ministry of Foreign Affairs Dr Majed bin Mohammed Al Ansari said that Qatar’s participation in the official ceremony to launch humanitarian program “Grain from Ukraine”, which aimed at helping African countries to get Ukrainian grain exports, reflects its keenness on supporting collective initiatives and multilateral international action, pointing out that the State of Qatar is at the forefront of countries seeking to achieve food security globally.

In a statement to Qatar News Agency (QNA), Dr Al Ansari said that Qatar’s contribution of USD 20 million in support of this program reaffirms its full commitment to humanitarian work, and its positive interaction with all initiatives to address the challenges facing the world.

The Russian-Ukrainian crisis, he said, has imposed great challenges worldwide, especially on food and energy security, noting that the State of Qatar has been calling since the beginning of this crisis for a peaceful resolution to it and affirmed its readiness to contribute to any international and regional effort to find an immediate and peaceful solution to it, adding that collective action is very important to address the repercussions of this crisis, especially at the humanitarian level.

The Adviser to the Deputy Prime Minister and Minister of Foreign Affairs and Official Spokesperson for Ministry of Foreign Affairs said that Qatar’s contributions to address the food security crisis in various countries of the world stem from its firm belief in the need to strengthen the resilience of vulnerable communities, within the framework of a firm conviction that the challenges facing any society represent a threat to all humanity.

Al Ansari said that Qatar’s response to global challenges was also evident during the COVID-19 pandemic as it made contributions exceeding USD 140 million, and signed a core contribution agreement with the World Health Organization worth USD 10 million to support the organization’s work program and the initiative to accelerate access to tools to combat the Coronavirus in the countries most in need.

He added that Qatar’s leading role in humanitarian work during the pandemic was also reflected in the efforts made by Qatar Airways to transport a large number of passengers to their home countries during difficult times for the global aviation sector as well as its significant contributions to transporting food to various countries of the world.

The Adviser to the Deputy Prime Minister and Minister of Foreign Affairs and Official Spokesperson for Ministry of Foreign Affairs stressed that humanitarian and development contributions are an integral part of the foreign policy of the State of Qatar, stressing Qatar’s commitment to contribute effectively to everything that would promote peace, security, stability and development in the region and the world. 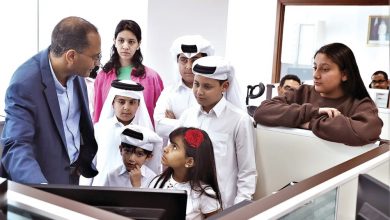